This week we will read about the community structure Moses outlines for his people to establish in the Promised Land. He starts with law courts and judges and magistrates, then proceeds to religious practice, to crime and punishment, to the monarchy, and to the laws of warfare. Throughout, he delivers the message that Israel is to be ruled by law, not by the whims of human officers. And he enunciates some great principles. Sample a few:

“Tzedek tzedek tirdof — Justice, justice shall you pursue.” The very third sentence of this section sets a standard.

“Uviarta ha-ra mikirbekha – Excise the evil from your midst.” No. not exercise. Excise – get rid of it! This line gets repeated, as it applies to more than one situation.

“Lo yumas al pee aid ekhad – The condemned shall not die on the testimony of one witness.” Any capital crime required two eye witnesses for a conviction. No circumstantial evidence allowed. Even the accused got the benefit of the doubt.

“Kee ha-adam aitz hasadeh? – Is the tree in the field a man?” When besieging an enemy city, don’t cut down fruit trees to build scaffolds over the city’s walls. The tree is not your enemy.

And of course, the most famous one: “A-yin takhas a-yin – An eye for an eye.” Particularly applied to a false witness, Moses specifies: “As he plotted to have done to his brother, so shall you do to him.”

The first of these quotes is unquestionably the dominant one. “Justice, justice…” Significantly, our commentators question the repetition. Certainly repetition is a familiar feature of human speech. Speakers – including rabbis and candidates – employ repetition for dramatic effect. Teachers use it to stress importance. When did Columbus discover America? 1492, 1492, say it again 1492 – and you never forgot it. It helped you remember when the Jews were expelled from Spain, too.

Cantors frequently used it for musical effect. I remember being quite surprised when the rabbi of one synagogue invited me to chant Musaf and added: “We don’t repeat words here.” Of course, Chabad congregations don’t let that interfere with the melody – when words run out, just sing Dy-de-dy-dy-dy!

Agitators and other politicians like to get demonstrators to echo their repeated slogans. Nothing new there either. One of them likely prompted Jeremiah to denounce those who shout “Shalom, shalom” and then he added, v’ain shalom – “Peace, peace” and there is no peace!

Repetitions enforce the meaning of the word. Sometimes they add new meaning.

In our Sedrah, why does Moses say “Justice, justice?” Isn’t one justice enough? The commentators conclude that justice is not open to any magistrate’s interpretation. Justice for the rich must be justice for the poor. Do not favor the poor out of sympathy, or pervert justice to honor the rich. (Or to reward campaign contributors.) Bachya ben Asher goes so far as to comment that this prohibits us from using unjust means to secure justice.

What we think of as “poetic justice” is strictly limited here. We are cautioned to apply the law strongly enough to “excise the evil.” Even though later generations took “an eye for eye” to mean the value of an eye, the principle remained. After all, putting out the guilty man’s eye is only an act of revenge; it really would not benefit his victim the way a sizeable payment would.

We might also take issue with those who talk about justice when their aims are questionable. Pursue justice, not advantage. Don’t manipulate the laws for your own benefit. Pursue justice, not convenience. Sure, the police would be more comfortable if they were the only ones armed. But owning a weapon is still legal. Pursue justice, not discrimination. An immigrant committed murder? Punish the killer, not all immigrants. We have a Divine command to pursue justice. In all its forms.

Justice, justice, and where is justice? Just like Peace, peace and there is no peace. They go together. That is what we must have, what we must insist on. Even fight for.

Justice in war is justice in peace.

And without justice, can we really have peace? In the Jewish vision of the Messianic future, they are inseparable. And now, as far as we may find ourselves from that future, we can still work to bring true justice into our lives, our communities, and hopefully our world. To the extent that we succeed in our pursuit of justice, we can build our prospects for lasting peace.

Ken y’hee ratzon. May this be G-d’s will. And ours. 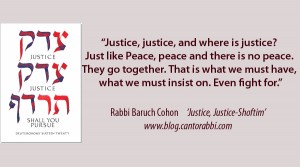