Our Torah reading this week starts with a call that can easily be translated “Lend me your ears!” No, this is not Marc Antony haranguing the Romans, and it has nothing to do with burying Caesar. This is Moses calling Heaven and Earth to attention.

This 41-line poem shows links with the entire subject matter of Torah and indeed it was reportedly sung throughout the year by the Levites in the Sanctuary when they prepared the Sabbath offering. Two sages of a past century insisted that every Jew should memorize Haazinu with all its melodic cantillations, in preparation to greet the Messiah. They also held that regular chanting of Haazinu would help achieve success in business. That may be open to question, but this much is for sure. Haazinu is the last song Moses will sing. It resounds with power and protest and principle.

After the formalities of Rosh Hashanah and the stringency of Yom Kippur, we owe it to ourselves to take a fresh look at this, the last song of Moses. As we go through the text, well-known lines stand out.

“Give ear, you heavens and I will speak; earth, hear my words!”

“When I call the Name of the L-rd, give greatness to our G-d!”

And the words that begin every Jewish burial ceremony: HaTzur tamim po’alo – “The Rock, His way is perfect…”

We sing our protest as did Moses: “Corruption in Him? No! That defect is in His children, a generation crooked and perverse.”

We face history: “Remember the days of old; consider the years, generation after generation. Ask your father, he will tell you; your elders will speak to you.”

We sing of Divine guidance of our ancestors: “Like an eagle waking the nest, and hovering over the young…, [G-d] rode him over the heights of Earth and he ate the fruit of the fields…’

Then comes bad news: “Jeshurun grew fat and kicked – fat and thick and gross – and he forsook his Creator, disgraced the Rock of his salvation.”

Moral corruption brings tragic defeats: “They are a perverse generation, children with no loyalty. They provoked Me with a non-god, angered Me with their vanities. I will punish them with a non-nation, with vile aliens will I provoke them.”

Moses names no names here. He leaves that to us. What is a non-god? In those days it was an idol called Baal. Later, that definition included mythic characters on Mount Olympus, or patron saints. Or deified humans from Jesus to Mohammed to Buddha to Lenin. And vanities? Plenty of those, from Scientology to Political Correctness. Valid objects of worship for some, perhaps, but not for Israelites.

Divine retribution is predicted through a non-nation. What is a non-nation? Let’s call it a tribe, whether political or ethnic. Like Nazis. Or “Palestinians.”

Moses’ prediction of salvation seems more than possible to happen: “Nations, sing aloud of G-d’s people, for He avenged the blood of His servants,
Returning vengeance to His enemies, and atoning for the land of His people.”

Today it takes some effort to recall the mid-60’s when it was “in” to be Jewish. Not only was “Fiddler on the Roof” Broadway’s biggest hit, but the State of Israel was in high favor. “Look what those Jews endured and look what they built! What a plucky little country.” Then came the Six-day War, more admiration for Jewish military success – but it didn’t last long. Public opinion started turning. Apparently the world could accept Jews as victims but not as victors.

Somewhere along the line, perhaps we missed something. Haazinu has it. After “Jeshurun got fat and kicked,” the Creator lets the savage results take place:

“From outside, the sword bereaves, and in the chamber is terror…
They are a nation void of counsel, they have no understanding…
How can one man chase a thousand, or two put ten thousand to flight?
Only if their Rock had given them over…”

Eichmann loaded freight cars and sent Jews to Auschwitz, much as Hungarian officials are doing with Syrian refugees today. Why didn’t we fight back before losing 6 million? Perhaps we can still learn from Haazinu:

“If only they would become wise, they would understand.
They would discern the result.” Lu khokhmu!

The comedian who said “Vy do ve get so soon old and so late shmart?” got the message. Violent action in a just cause is not wrong. Torah wisdom can help us determine the justice of our cause. Let’s “become wise.” 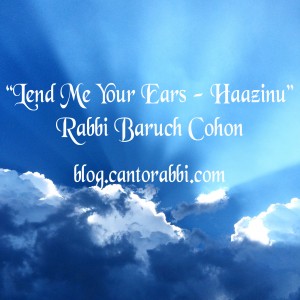