Of all the laws stated in this week’s reading — from capital punishment for rape to compassionate treatment of farm animals, from the warning against making vows to the reminder of proper relations with neighboring tribes, with the periodic refrain “purge the evil from your midst” — perhaps the most significant lesson for our generation comes in the opening words of Kee teitzei. Like parallel passages in last week’s Sedrah, this sentence, Kee teitzei lamilkhama al oy’vekha, concerns conduct in warfare, and its translation raises a question.

One English version starts this way: “When you go out to war against your enemies…”

Another one says: “If you go out to war against your enemies…”

Then they both continue with a detailed message about how to treat a female captive.

The question raised concerns the translation of the word Kee. Does it mean when? Or if? “When” would accept the reality that wars happen, and there are rules – or there should be rules – governing the soldier’s conduct. On the other hand, “If” would indicate a choice. You go out to war only if you want to? Volunteers get sworn in; civilians are exempt?

On further examination, an ordinary Hebrew-English dictionary will offer several translations of the word Kee, including both “if” and “when.” Interestingly enough, the same dictionary will also translate Kee as “because.” And thereby we can learn something. Kee teitzei la-milkhama – you go to war because – because you have enemies and they attack you, because you have to fight them off before they destroy you, or maybe because you want to make peace and they won’t negotiate with you.

With one little word, our Sedrah illustrates a historical truth that gets ignored in our time: it takes two to make peace, but only one to make war. If you go out to war, and when you go out to war, it’s because you have no choice. Contemporary policies may imagine such a choice, but go find it. Cases in point: Gaza rockets, 9/11 attacks, Pearl Harbor.

Treatment of captive women as outlined in the Torah for victorious Israelite soldiers differed entirely, of course, from the treatment Israelite women could expect under the reverse conditions.

On the contrary, at the very end of the Sedrah we will read a section that will be repeated on Purim: “Destroy the memory of Amalek!” Not just the fighting forces of Amalek, but his evil plan. The very memory of Amalek must be destroyed. Significantly, next Purim we will again hear the interpretation: Haman mi-zera Amalek – Haman the Purim villain is descended from Amalek! Evidently Israel went to war against Amalek, but did not purge the evil. Besides Haman, the descendants of Amalek – whether physical or spiritual – include Torquemada, Khmelnitsky, Hitler, Arafat, Khamenei… and the list goes on, demanding our attention, calling for action. Not if, not when. Because. Because we must purge the evil.

In order to purge the evil, we must identify our enemies. 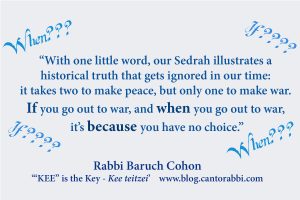