Frequently our tradition uses the opening words of a Torah reading as the name of the week’s section. Last week it was “Kee Teitzei” about going out – in that case, to war. This week it is “Kee Tavo” about coming in – entering the Land of Israel. Not just entering it, in fact, but possessing it and taking responsibility for it. Here Moses gives his people a definite pattern for establishing a nation of residents and natives, united in a way of life that remembers and reveres its past, and applies its religious principles to its daily life.

Tithing their crops expresses the appreciation of Israelite farmers for their land, and provides some support for the Levites and Cohanim in the Temple. It was also the same farmer’s duty to bring the first fruits of his land to Jerusalem, and to share them with the Levites, and with others who had no land – “strangers” (otherwise known as resident aliens), and widows and orphans. Building a nation was no easy task for 12 tribes whose parents were slaves. For the purpose of making this nation more just and more worthy than the Egypt they once fled, Moses predicts the results of bad conduct, of corruption and idolatry. The list of curses we will read here could be calculated to scare people into better action. “Betroth a woman, and another man will violate her… Your sons and daughters will be given to another nation; you will see it, and long for them, but you will have no power… The stranger among you will rise higher and higher, and you will come down lower and lower… A savage nation speaking a strange language will invade and conquer you…“ Some familiar events there. Commentators indeed observe that these threatened sufferings – called the tokhakha – were exceeded only by the actual sufferings of Jewish history.

By contrast, the blessings this Sedrah envisions certainly are worth reaching for. “Be blessed in the city and blessed in the field… Your enemies will attack you and they will fall before you; they will invade on one road and flee from you on seven roads… G-d will make you the head, and not the tail. You will only rise up and not fall down, if you will just listen to the Mitzvos… “ That’s the challenge. Just listen to the Mitzvos – and do them.

Worth considering is the fact that the blessings listed in Chapter 28 of our reading cover just the first 14 sentences.

The curses cover the next 54 sentences. Quite a challenge.

Looking back over these messages about going out and coming in, we need to remember that both messages are stated in the singular. Whether we live in Israel or another country, whether we live under a government that is honest or corrupt, each one of us must take whatever responsibility we can for our own lives and the lives of our children. Sometimes we must go out to war, and do our best to be noble winners. And coming into our residences, we must be equally determined to achieve both prosperity and justice.

Despite the tyranny of Czars and Sultans and dictators, our ancestors managed to pass some great life lessons on to us. Whatever questionable politics may do to our own situation in the coming days, let’s remain committed to living the life that earns some of our Sedrah’s short list of blessings. “All these blessings [can] come to you and overtake you, because you will listen to the voice of G-d.” 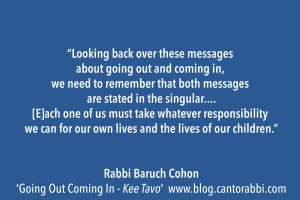