Several contrasting stories in this week’s Torah reading, exploring how Abraham handled different experiences, finally lead up to the most famous experience of all – the Akeida – the sacrifice of Isaac, which of course does not really take place. It is the Divine test of Abraham’s devotion. He leaves his two helpers at a distance, and takes his son – only his son – his only son by Sarah – up the mountain with him. Tradition tells us that this mountain is none other than the Temple Mount. The Torah does not say that, just calls it the “place that G-d told him.” On the way, Isaac asks the obvious question: “Here is the fire and here is the wood, and where is the sheep for the sacrifice?” And Abraham replies that G-d will provide the sheep. Some commentators insist that Isaac knew he was the “sheep” and had every intention of giving his life. What was going through the mind of Abraham, we cannot guess. But he builds the altar and prepares the wood.

We all know what happened. Abraham raises the knife to slaughter his son, and a heavenly voice stops him. He passed the test! Turning to look around, he sees the ram caught in the bush by his horn and sacrifices the ram “instead of his son.”

Then Abraham gets a great blessing. Really no one else in the Bible qualifies for this blessing. “Through your descendants,” says G-d, “all the nations on the earth will bless themselves.”

Did it really happen? Did Abraham’s descendants bring blessing to the entire human race? We see some important statistics about that – like the percentage of Jewish winners of Nobel prizes in science, in medicine, in various fields that make life better for people. We descendants of Abraham tend to glory in the Jewish names among leading authors, movie stars and politicians. Is that what the Torah means?

We also hear about Abrahamic religions – monotheisms including both Christianity and Islam – that resulted from Abraham’s discovery of the One G-d.

Perhaps Leo Tolstoy’s quote in the Hertz Commentary is worth remembering in this context. Tolstoy wrote: “The Jew is that sacred being who has brought down from heaven the everlasting fire, and has illuminated with it the entire world.”

I dare say most of us do not feel that we are sacred beings, and most of us cannot claim credit for illuminating the world. But it’s a great idea, and a great legacy, this heritage of our Father Abraham. He passed a test, the test of human value. He proved he was willing to sacrifice his son’s life to prove his faith, and by following his inspiration to substitute the animal he put an end to the barbaric practice of human sacrifice among his people. Saving human life helps to illuminate the word.

His descendants did continue sacrificing animals for many generations, but they set increasing limits. First they did away with private altars, then they confined sacrificial worship to the Jerusalem Temple. And when they lost the Temple, they substituted prayer – t’filah bim’kom korban, prayer in the place of sacrifice. And let their animals live.

If all this illumines the world, so be it. We can rejoice in being Abraham’s descendants!

Over the course of the centuries, and again today, we find ourselves dealing with those who don’t share Abraham’s blessing. Some of them even claim to be Abraham’s other descendants, the Ishmaelites. Mathematicians credit the Arabs with inventing the concept of the zero. Quite symbolic. Yet today they share the benefits of Abraham’s Jewish descendants, in Israeli hospitals, in high technology, and in a religion which proclaims only one G-d, even when terrorists distort that faith to sanction murder.

Let’s hope we can continue doing so. 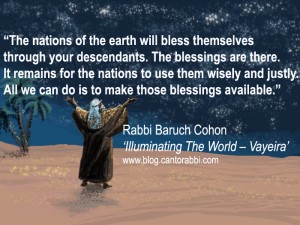