Of all the topics discussed in this week’s reading, one that comes near the end is easily the most familiar, and perhaps most important for our generation. It is identified as the Priestly Benediction, pronounced by Aaron’s sons in the ancient Temple, and by their descendants in traditional synagogues ever since. In many liberal congregations, the rabbi replaces the cohanim for the blessing.

It consists of 3 brief Hebrew sentences. The first one, just 3 words long, vouchsafes physical safety. “May G-d bless you and guard you.” The second one, in 5 words, asks for spiritual awareness: “May G-d’s presence shine on you and be favorable.” And the third one’s 7 words promise peace: “May G-d’s presence enter your life and bring you peace.” That wonderful line asks for much more than the absence of armed conflict. It is addressed to each individual. It asks for peace of mind, and peace of spirit.

The Priestly Benediction, whether pronounced by descendants of Aaron or by clergymen, calls for an accepting answer from those being blessed. And in synagogue practice it also includes music.

Rockdale Avenue Temple in Cincinnati was a model of Classical Reform as I remember it in the ‘30’s. Among the minimal uses of Hebrew in its festival services came the Priestly Benediction, recited by the rabbi in stentorian tones (remember this was before the days of most microphones.) After he said the first line, we heard the four church singers in the choir loft in perfect harmony: “The Lord bless thee and keep thee.” Each line got a corresponding answer. Three lines. Three angelic-sounding musical responses delivered in a classical major cadence. A spell was cast.

At the other pole of observance, at the Chabad synagogue where, along with other cohanim, I took part in the blessing this Shavuot morning, the prayer leader gave us a melody to introduce each word, excepting only the Divine Name. Two trademark Chabad melodies alternate, and the cohanim all have to know what phrases to repeat. At the end of each line, some 150 voices chant “Amen” – in some 150 keys—with spirit. When we conclude the blessing, congregants shake our hands to show their appreciation.

Between these two poles we find musical expressions ranging from medium to minimal to missing. Many synagogues have the cohanim sing a melody just before the last word of each line. Others have the cohanim do a plain repetition of the cantor’s chant on each word, and the congregation responds with the words Ken y’hee ratzon – “May it be G-d’s will.” All traditional synagogues, and any liberal ones who follow the custom, have the cohanim repeat each word that the cantor chants, symbolizing the idea that they are not the source of the blessing. They are the conduit. Musically, physically and conceptually, we ask Divine blessing on each other. And by our positive answer we express the confidence that we will succeed.

The process of cohanim blessing the congregation is called dukhenen. Experience it, next High Holidays and Succoth, whether you are a cohen and can relay the blessing or a congregant who can receive it. And join in singing the response. Hear the music. Feel the echo. 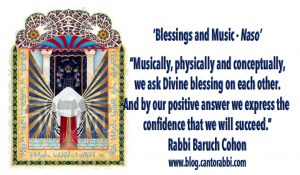