This week gives us a Sedrah and a Haftorah that are both full of marvelous, famous lines to quote. Our first prayer when we enter a synagogue is a line from this Sedrah: Mah tovu ohalekha Yaakov – “How fair are your tents, Jacob!” And later in this Shabos service we will hear the Haftorah, finishing with Micah’s message: Higid l’kha Adam mah tov – “He told you, oh man, what is good.” Great lines. Great quotes, echoing religious truth and inspiration.

We can also find a powerful political message in these readings. Here is Balak, king of Moab. He sees hundreds of thousands of aliens entering his country. He’s alarmed. There goes the neighborhood, right? These aliens will “lick up the land,” he says. They’ll take away jobs, housing, public facilities.

So what does he do? Build a wall? Threaten deportation? Not Balak. He sends for a sorcerer named Bilaam. “Come put a curse on them,” he says. “Keep them out of my schools, keep them out of my hospitals, keep them from learning my language.” And he sends a special delegation to the sorcerer with a definite message: This curse is worth money to the king.

Bilaam invites the delegates to spend the night while he consults with a Higher Authority, seeking a message from the Divine. That night in his dreams comes the Divine question: Mee ha-anashim ha-eyleh? “Who are these men?”

Come on, now. You mean HaShem doesn’t know who Bilaam’s visitors are? Of course He knows. So why is He asking? A great commentator, the Kli Yokor, points out that there are two ways of asking Who? One is for information; the other is an expression of scorn: Who ARE these guys? Who do they think they are? Who do you think they are? You think they’re princes, officers, statesmen? They’re PR men! Don’t go with them.

Of course, Bilaam is thinking with his pocket. If he shouldn’t go with this committee of PR men, then maybe a more important committee will be different – more clout, more cash. So he doesn’t go with Balak’s first group, but he does go with the next group. Higher rank. Higher offer.

The story continues with fascinating detail about Bilaam’s journey by donkey, his repeated forced stops along the way, his three projected curses which all turn into blessings, prompting Balak’s fury. And the reward Bilaam never collects. On this eventful trip, what ultimately stops Bilaam? His donkey. The world’s only talking donkey, right?

Wrong. In politics, as I’m sure you heard before, you can find plenty of talking jackasses. Bilaam’s donkey was not unique. Except…

Except that we are told in Pirkey Avot that this donkey’s power of speech was specially created at the time of the creation of the universe – on Shabos beyn hash’moshos – at twilight before that first Sabbath at the dawn of time – created then as one of the few exceptions that prove the rules of Creation, the rules of Nature. Specifically provided for this particular purpose. For this particular man – Bilaam.

How does he rate?

Granted, he had an evil streak – greed and cunning and a deep desire to destroy Israel. Granted, he found himself unable to utter the curse, but he managed to send women out of Midian to seduce the Israelite men into idolatry. Yet, despite his evil side, Bilaam was very lucky. He had a fabulous donkey who saved his life, not once but three times right here in this story. He himself could not see what the donkey saw – a mal’akh blocking his way.

What’s the mal’akh? An angel? Literally a messenger? He’s more than that. The mal’akh with the drawn sword is the consequence of Bilaam’s action.

It takes a lot of wisdom to see the consequences of what we plan to do. Bilaam couldn’t see those consequences, but the donkey could. The third time she sees the danger, the donkey squats down on the ground for safety, whereupon Bilaam blows his stack and beats his donkey with a stick. Only then does the donkey speak, saying, in effect: “You think I’m only a jackass, but I’m smarter than you are. Open your eyes and look what you may be getting us into!”

Isn’t that what any political leader, in fact any responsible human being needs to hear? Sometimes it takes the talking donkey in our midst to open our eyes. She never went to school, Bilaam’s donkey. She has no wealth, no power, no status. But she can see what Bilaam can’t see – because she is not blinded by the thought of Balak’s gold. Bilaam cannot see the results of his own curse.

You can discriminate against people. You can keep them down. You can exploit them. You can even praise them while you’re doing it. That’s what Bilaam did when he said Mah tovu, isn’t it? Praise the aliens for building nice tents. But his real objective was to get those tents for himself, or to destroy them. It would be like Khamenei praising the skyscrapers of Tel Aviv.

Sooner or later there’s an avenging messenger to deal with.

And here’s where the prophet Micah comes in, to tell us: Look ahead, and see the real purpose. What does HaShem require of us? Asot mishpat – DO justice, don’t just talk about it. Justice is even. Justice is fair. Don’t favor the rich; don’t favor the poor.

Secondly: Ahavat Khesed – love mercy. Know the difference between love and seduction. Bilaam wanted to be seduced by Balak’s PR men, and glorified with Balak’s gold. When that didn’t work, he stirred up some seduction himself, and spread disease among those alien Hebrews. Couldn’t beat them with a hex? We’ll beat them with sex. And pass it off as love.

So Micah comes to tell us: Ahavat Khesed – love mercy. More than passion is compassion.

Third: And always, whether you lead a nation, a city, a family, a local organization, or a chapter of a global movement – or just lead your own life – Hatzneya lekhet – walk with humility. Humility does not mean to be timid and always take the back seat. Humility means, be ready to listen – listen to the message of your heritage, and you have a great one…listen to the voice of your conscience…even be ready to listen to somebody you may think is only a talking donkey. Just be careful. Don’t confuse the talking donkey with the prophet.

Today, we need to listen to the Prophet Micah. 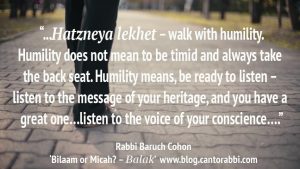