ALL ABOUT MIRIAM – Chukas, Numbers 20 – by Rabbi Baruch Cohon

ALL ABOUT MIRIAM – Chukas, Numbers 20 – by Rabbi Baruch Cohon

At the beginning of Chapter 20 in the Book of Numbers we will read this week of the death of Miriam, sister of Moses and Aaron. Tersely the Torah says: “The people stayed at Kadesh. Miriam died there and was buried there.” Period.

At the end of the same chapter we will read of the death of Aaron, the High Priest. During his last day, he gets taken up the mountain by his brother Moses, along with his son Eleazar. There, at G-d’s command, Moses divests Aaron of the priestly clothes, the evidence of his position, and dresses Eleazar in those clothes as his successor. Then Aaron dies peacefully, and the entire camp mourns him, shedding tears for 30 days.

Tears? Now wait a minute. Wasn’t Miriam worth a few tears? She started her career by saving her baby brother Moses from Pharaoh’s genocidal edict, and providing the Egyptian princess with a Hebrew nursemaid for him – namely her mother. She continued her service by leading the women of Israel in song when they crossed the Red Sea on dry land. She is called n’viah — a prophetess – both there and in the later books of the Bible. All right, she badmouthed Moses’ wife. But so did Aaron. And Miriam took the punishment for that offense, spending a week in quarantine outside the camp. During that week the people stayed where they were; they would not move on without her. She was important to them.

Just how important Miriam was, we learn from the very next sentence after her burial. “There was no water for the people, and they protested to Moses and Aaron.” In this succession of events, the rabbis found a connection. Miriam was the connection. In her merit, a miraculous water well accompanied the people on their desert trek. When she died, no more water.

The Lubavitcher Rebbe notes the traditional principle Eyn ma-yim ella Torah – “Torah is the only water,” signifying that just as water is indispensable to physical life, so Torah is what we all need for our spiritual life. And he comments that just as Miriam’s lifelong interest was in helping children, so every mother, sister and teacher can give spiritual life to the growing generation. Certainly for most of us, our first taste of the water of Torah – from how to pronounce haMotzi to honoring our parents and telling the truth – the very concept of Mitzvah — came from a woman. Could be our mothers, grandmothers, older sisters – each one following Miriam’s example. So we all still drink from Miriam’s well.

Of course, something else is missing from the story of Miriam’s death. Who buried her? After all, she had next of kin. If Abraham could insist on buying the Cave of Machpelah to bury Sarah…if Isaac and Ishmael could overcome their conflict with each other and join in burying their father Abraham… if Jacob could build a special tomb for Rachel… did Miriam have to be buried by some impersonal burial society?

These questions bring up another, also quite interesting question. Besides her brothers, did Miriam have any family of her own? The Torah mentions none. No mate, no children. True, later commentators and Talmudic rabbis associate Miriam’s identity with several other women who are named in the Torah, including the wife of Caleb – Joshua’s fellow-spy and the only other one who brought a positive report about the Holy Land. They also posit that Miriam, by another name, had a son named Khur who once climbed the mountain with Moses. But none of these connections appear in the Torah text. And none of them figure in Miriam’s last rites. On the textual evidence, she died as she lived – by herself.

Considered this way, Miriam emerges as an exception to the pervading Jewish ideal of family growth. She did not bear any future leaders. She said what she thought, and did what she believed in. She benefitted her people in her own unique way. Among the great women of the Bible, she clearly stands alone.

No wonder hers is a favorite name for Jewish daughters, ever since her time. 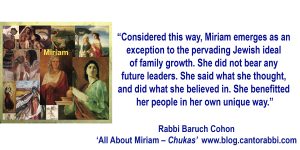