RINGS ON THE ARK by Rabbi Baruch Cohon

RINGS ON THE ARK  Parsha Trumah

Chapters 25-27 of Exodus provide a description of the first Jewish sanctuary in complete detail.  All it lacks is a blueprint, and succeeding generations of construction-minded scholars have supplied that.  Some modern editions of the Torah actually include pictorial depictions of the Ark, the altars, the showbread table, the curtains  all the elements that made up the ancient Israelites religious center, the place where they offered prayers and sacrifices.  Here is where the gold they borrowed in Egypt got put to use, as the wooden structures were decorated in the precious metal. Another use for the metal, however, was more practical.   On each of the four corners of the Ark, and each of the four corners of each altar, they had to mount heavy gold rings.

Why did they need rings on the Holy Ark?  To carry it.  Long wooden poles went through each pair of rings, and men from the Tribe of Levi put their shoulders under those poles and transported the sacred structures as the people journeyed through the desert.  Primitive transportation, to be sure.  For all those 40 years, from the Red Sea by a tortured route to the east bank of the River Jordan, these people had no wheels.  Egypt had wheels.  Moab had camels.  But Israel walked.  Israel needed those rings on the Ark.

So Judaism started out as a portable religion.  Only in Solomons Temple were there no rings on the ark.  That would be a permanent House of G-d.  And so it was for generations.  Until disaster came.  Enemies attacked and destroyed it.  Twice.  The first time, brave and dedicated leaders were able to go back and rebuild it.  But the second time, no way of rebuilding.  What would happen to Judaism?  Where would a defeated nation find rings to carry the Ark of the Covenant?

Then came a dedicated teacher and visionary named Yohanan ben Zakkai.   During the Roman siege of Jerusalem, when no Jews were permitted to leave the city except to bury the dead, the Talmud recounts that he lay down in a coffin and had his students carry him out.  Reaching the Roman camp, Yohanan proceeded to stand up out of the coffin and tell the officer Take me to your leader.  That leader was a general named Vespasian, whom Yohanan greeted as Emperor.  Vespasian corrected him, but Yohanan predicted that he would become emperor, as indeed he did.  Whether Vespasian believed him or was just flattered, he asked Yohanan: What do you want?  You risked your life to come to me.  What are you seeking?  Then Yohanan asked for the right to take his students to a town called Yavneh and teach them there.  Vespasian agreed.  The school they started was called Kerem bYavneh  the vineyard in Yavneh  because the students lined up like the rows of vines in a vineyard.  There they kept Torah alive.

When Rosh Hashanah came, they hesitated to blow the Shofar.  A new problem, since in their memory the shofar was never blown outside of the Temple in Jerusalem.  But here it was, the morning of Rosh Hashanah, which is defined in the Torah as Yom truah  the day of sounding the horn.  They had to discuss the law on this topic.  Yohanan told them: Sound the Shofar.  We will discuss it later.  Once it was sounded, they realized that discussion was unnecessary.  The Shofar call in Yavneh replaced the rings on the Ark.

Again, Judaism was portable.  It remained portable, journeying to every continent on the globe. It remains portable now, whether moving from any citys downtown to uptown, or returning to Jerusalem.  And I daresay it will remain portable even if alien shrines get removed from the Temple Mount and a new Sanctuary is built there.  Bchol ha-aretz kvodo  Throughout Earth is G-ds glory. 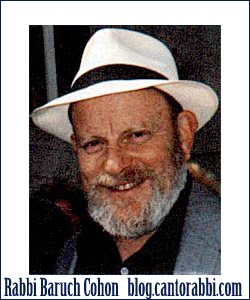