This week our Torah reading starts with a famous flood and continues to the construction of a famous tower. Noah, who gives his name to this portion, is the only one qualified to save human and animal life from a disaster that would otherwise destroy everything. We follow him, his family and his menagerie through their adventures so often dramatized. Without his faith and courage, says the Torah, we would not be here. Indeed he was so true that G-d promised it would never happen again. Any doubts? Next time a storm hits, just look for that rainbow.

Some 6 or 7 generations after Noah’s landing on Mount Ararat – also 6 or 7 chapters later in Genesis but part of this same reading — we come to a tale of Noah’s descendants, now expanded to a good size population. All of them speak the same language, which our commentators insist was Hebrew, the holy tongue, the “original language.” We find no leader’s name here, but somehow these people are as united in their plans as they are in their speech. They urge each other: “Let’s manufacture bricks and build a city and a tower with its top in the sky. We will make a name for ourselves, and won’t be scattered all over the earth.”

So they start to build the Tower of Babel. Communication is no problem, foreman and laborer use the same words, so the construction project progresses efficiently. All are devoted to its completion. So much so, says the well-known legend, that as the structure grew higher and higher, if a worker lost his footing and fell to his death, no one took notice of it. But drop a brick – and they would mourn. Like the ziggurats of later Babylonia, this tower would establish their ownership of the world. Theirs, not G-d’s.

Torah tells us that, unable to understand each other, they “scattered over all the earth, and stopped building the city. Therefore [G-d] calls its name Babel, because here He confused (balal) the languages of the Earth…”

Implied here if not stated literally, the builders of the tower were defying Divine authority. If they could dominate Earth, they could also conquer Heaven! That’s ultimate chutzpah. Quite a serious offense.

So, Rashi our great commentator asks, why the bloodless punishment? Noah’s flood wiped out most of life on Earth. And here just a frustrated dispersion? The difference, he says, is the nature of the offense being punished. The Flood Generation practiced violence (in Hebrew Hamas – where did we hear that name before?). Ibn Ezra further defines their offense as robbery, fraud and “taking women by force.” These people were in constant conflict with each other. By contrast, the Tower Generation had customs of love and friendship, with the same language and the same interests. Therefore, Rashi concludes, “learn [from this, that] division is hateful, but peace is great.”

Even peaceful cooperation can be misdirected, as it was in Babel. We see that. But its results are not total destruction. Alien-phrased babbling, perhaps, but not universally fatal. But personal power and advantage at the expense of everyone else? The Flood Generation’s pattern? That’s fatally bad news. Corruption, crime and calamity.

In any generation, we can apply these thoughts to private or public issues as they fit. Constructive or destructive action can involve us anywhere. After all, both the Flood Generation and the Tower Generation paid their price. According to Rashi, their punishment fit their crime. Of course, if Noah’s contemporaries gave each other more consideration – or if the Babel builders were providing safe havens instead of proclaiming world empire – different stories could be told. Our results too are what we bring on ourselves.

While aiming for a life of achievement and blessing, let’s remember that “division is hateful, but peace is great.” 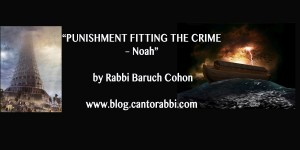