This year our great holiday of freedom begins on Shabbos, so we will read the special portion for the First Day of Passover, from Exodus chapter 12, describing the fateful night of the Exodus. From the preparation of the sacrificial lamb to marking the doorposts of the Hebrews’ homes, the narrative continues with the Tenth Plague – death of the firstborn, which struck the Egyptians but spared the Hebrew slaves. The avenging angel saw the blood on the doorposts and passed over – pasach. So here comes the commandment that the people must keep this festival in celebration of the great deliverance, even when they reach their homeland. Here we also read how the Egyptians, struck and bereaved and desperate, pushed the slaves to go – go free, get on your way! They even gave the Israelites valuable gifts, including gold and silver, to urge them out. Many Egyptians followed them, forming an eyrev rav – a mixed multitude. After 430 years in the country called bet avadim – the home of slaves, the people of Israel get their instructions for their free future:

It was a night of watching for G-d, bringing them out of the Land of Egypt; that is tonight, a night of watching for all generations. This is the law of the paschal sacrifice: no alien may eat any of it. … But if a proselyte lives with you and will offer a Passover sacrifice, let him and all the males in his household be circumcised; then they can eat. One Torah shall be for the native and the proselyte who lives among you (resident alien).

One Torah, one law. No penalties for aliens, and no special privileges for them either. Without doubt, circumcision represents sincere commitment. One holiday meal would hardly seem enough of an attraction to take that step. So we must recognize that some valuable converts entered our fold and were required to follow the same mitzvos as born Jews.

Elsewhere we learn about resident aliens, called literally ger toshav, who lived among the Israelites in their land and were not expected to keep the 613 commandments required of Jews. All they needed to observe were the 7 mitzvos b’ney Noakh – the commandments of the sons of Noah, given after the Flood: (1) establish courts of justice, (2) prohibit blasphemy, (3) prohibit idolatry, (4) prohibit incest, (5) prohibit bloodshed, (6) prohibit robbery, (7) do not eat flesh cut from a living animal. Not a word about observing the Sabbath, or keeping kosher, or celebrating any particular occasions. Not even about whom – or how many – to marry. Just everyday morality. Did the ger toshav just possibly have it easier than his Jewish neighbors?

Viewing today’s policy debates about resident aliens, their rights, liabilities and privileges as “refugees,” “illegal immigrants,” or “terrorists,” maybe we need to take another look at the principle of One Torah – one law for the native and the foreigner – and the difficulties in applying such an apparently just policy.

Ancient Israel, modern Israel, the United States or any other country, can face problems that come with a mixed population. In Torah times, most states assumed unanimity, and ruled their people accordingly, whether it suited facts or not. Israel already recognized differences in its inhabitants. In our high-tech, multi-ethnic world, we can do no less. 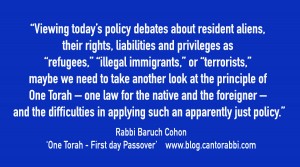