This week we will read some famous do’s and don’t’s that the Torah provides to enable us to elevate our lives. Given just “after the death of Aaron’s two sons – ah’rey mos shney b’ney Aharon” who lost their lives by bringing a “strange fire” into the Tabernacle, these laws created a structure designed to prevent such fatal errors in the future. That future is where we live now.

Opening with the Day of Atonement ritual, this week’s reading details rights and wrongs in food, worship, family and sexual relations, pointing out that wrong conduct in Egypt and among the previous residents of Canaan caused their defeat, and charging the Israelites to keep their Promised Land clean of moral violations.

Recognizing human weakness, the Torah sets up the famous ritual of the scapegoat, wherein the High Priest takes two goats, equal in lineage, and offers one as a sacrifice. The other one he symbolically loads with all the sins of his people – he knows he must expect them to sin. And he sends out the goat with an appointed messenger to a mysterious place in the desert called Azazel. Perhaps that was the name of a mountain from which the hapless goat got hurled. If so, we have no exact location for it. Definitely, whatever and wherever it was, Azazel was the destination for the sins we need to destroy. And the day of this ritual is the day we still observe by “afflicting our souls – v’inisem es nafshoseichem,” in other words fasting. Here the Torah sets the date, the 10th day of the 7th month, to atone for our sins. As our tradition stresses, fasting alone won’t do it. T’shuvah, t’filah u-tz’dokkoh – repentance, prayer and charity are required. By the end of that long Yom Kippur day in shul, we should be able to breathe free, to take that first bite and face the future with renewed strength.

Our Sedrah continues by discussing proper and improper ways to prepare meat. During Temple times, the fat was burned and the blood sprinkled on the altar. Blood is still not to be consumed. No steak juice. It was connected with idolatrous worship and therefore prohibited to Israel. Interestingly enough, this Sedrah does not discuss kosher and non-kosher meat. We read those laws elsewhere in the Torah. Here we are concerned with domestic animals: shor o kesev o eyz – ox, lamb or goat, all approved foods, slaughtered properly. We also recognize game animals and birds which are permissible food, and we learn than their blood should be poured on the ground like water, because “a creature’s life is in its blood.” By refraining from drinking the blood, we respect the life that we took by shooting that creature. Hunting is thereby a recognized action that humans take to provide themselves with food. But even then we remind ourselves that all life comes from G-d.

Our portion then discusses other censorable topics like incest, perversion, and assorted varieties of immorality. Some of these practices were associated with idolatrous worship by the Canaanite tribes. Others are just plain wrong. That is, they are against Torah law. Included is bestiality; no “pet sheep” for the Israelite farmer, and no carnal contact between his wife and their ox. Also included is homosexuality; “Do not lie with a male as with a female; it is an abomination.” Also lesbianism, called maasey eretz Mitzrayim – the actions of the land of Egypt, where female members of the royalty and aristocracy were known to keep concubines. If and when a modern society chooses to reverse those laws, an inevitable controversy with religious doctrine arises, as we see today. What effect will these controversies have on family structure?

When we can answer that question, maybe we will find out where Azazel is. 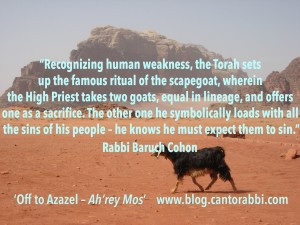