This week’s Torah reading includes parts of a story that is spread out over several chapters of the Book of Genesis. It is the story of Abraham’s relationship with his nephew Lot. Lot tagged along with Abraham and Sarah in their early travels to Canaan and Egypt and back. Along the way he shared in Abraham’s success, acquiring herds and flocks, to the point where a fight broke out between their shepherds because “the land could not support them to dwell together (Gen.13:6)”. So Abraham gives Lot a choice: “If you go to the left, I will go to the right, and if right I will go left. We are brothers.”

So Lot picks the fertile Jordan valley and settles in Sodom. Yes, the famous Sodom, the city that gave its name to one form of sexual perversion. That is not all. Next week we will read about other evils that condemned Sodom. But for now, Lot sees a chance for more prosperity and moves to it.

Then comes a war between nine of the ancient city-states – four local kings against five. One of those five was the king of Sodom. His side was losing. The Big Four captured his people – including Lot.

When Abraham hears the news, he assembles his forces and goes after the conquering tribesmen, vanquishes them and rescues Lot and all the captured prisoners and their possessions. At the victory party, the king of Sodom offers Abraham an unusual deal: “Give me the people and you take the spoils.” In other words, I’ll take Lot; you take the loot. Unexpected generosity, particularly in the Middle East, right? Well, Abraham turns him down. “I swore to the Creator of Heaven and Earth, that nothing from a thread to a shoe-string will I take from you. You will never be able to say ‘I made Abram rich.’” In fact he had already returned Lot and his people to their homes. That was his only objective.

What about Lot? Was he some kind of tzadik, some great character that inspired Abraham to risk life and fortune for his sake? Not hardly. Our commentators indicate that he never stopped his shepherds from stealing pastureland and property from farmers in their neighborhood; that’s why they got into trouble with Abraham’s men who were behaving honestly. And coming next week is the great episode of Lot’s adventures during and after the destruction of Sodom where he was living with his wife and two daughters. Remember that one?

The Divine messengers arrive in Sodom to warn Lot of impending calamity. He invites them to spend the night at his house. That night a gang of Sodomites threatens to break down his door to get at the visitors, and Lot offers the gang his daughters instead. True, with Sodomites that probably wouldn’t appease them. But the Divine messengers step in and blind the gang members nearest the door, discouraging the attack. Then they spirit Lot and his family out of town. As they climb the nearest hill, Sodom is destroyed by what reads like a volcanic eruption – definitely a supernatural event since the Jordan valley is very short of volcanoes – and Lot’s wife disobeys orders and looks back to watch the fireworks. We never learn her name, but we do read her tragedy: she is turned into a pillar of salt! So far as we know, Lot does nothing to try to save her.

Afraid to stay in the nearby town of Zoar, Lot takes his daughters to the mountain and hides there. Their husbands never made it out of Sodom because, as we read, they didn’t believe destruction would come. So these two young women have no prospect of becoming mothers. What they do have is wine. So they feed their father enough wine to get him blotto, and proceed to engage in incest.

No, Lot was no great man. What he was, was Abraham’s nephew. As such, he merited Abraham’s concern and action – to care for him, to fight for him and rescue him, to pray for Divine help for him. In later Jewish history we developed the principle of pidyon sh’vuyim – redeeming prisoners – as a great mitzvah. We don’t judge them. They are our people. They could be in DP camps, or Ethiopian villages, or Iranian jails. They could be Talmud scholars or illiterate peasants. They could be observant Jews or godless Communists. We have a responsibility to help them. 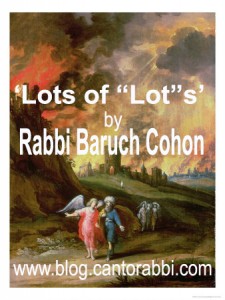