Film festivals of all types entertain audiences throughout the world by now. In many ways, the Los Angeles Jewish Film Festival stands out as unique. One distinction is its international scope. The opening night gala on May 18th was co-sponsored by the Israeli Consulate. No surprise there; we saw Israeli films that night. But other shows were programmed differently. Just as the Jewish population occupies many different places, so do the films that document its life. Reflecting the Festival’s worldwide sources, on-screen thanks also went to the Consulates of Poland, France, Germany, Hungary, Italy and Austria.

Another distinguishing fact of this year’s festival is that it is not limited to theatrically released films. In fact, on opening night we saw a pair of segments from a current Israeli TV series called “False Flag,” or its more descriptive Hebrew title “Kfulim – Doubles.”

Already sold to a U.S. company for an American version, False Flag turned out to be a powerful kickoff choice for the 2016 series. Filmed in Hebrew, with English subtitles – and the subtitles appeared even when one of the cast members (an American olah) spoke in English! — the story concerns a group of five ordinary Israeli citizens who somehow get caught up in international espionage, when they are reported implicated in the Moscow kidnapping of an Iranian official. Opening the first segment is a Russian spokesman delivering his indictment. Then the Shin Bet gets involved, and all you-know-what breaks loose.

Writer Amit Cohen and director Oded Ruskin can be credited with creating some truly exciting experiences. The audience was riveted, and their applause was thunderous. From the bride who gets arrested and taken into custody from her wedding, to the bearded young man who ducks into an airliner’s restroom to apply an electric razor to his hair and beard, refusing knocks on the door and finally packaging the hair in a plastic bag and shoving it into a overhead baggage rack; from the interrogation where the accused is denied access to a lawyer, to the final sequence of that opening night, described below, we saw what international crime can do to innocent individuals.

That last sequence was memorable. One of the featured five Israelis is steering his boat through the harbor on his way to leave the country. He gets radio messages, call after call from Security, ordering him to return to the dock immediately. Ignoring them, he picks up speed, but the speedboats are after him. He proceeds to set up his alternate escape, and as the speedboats bear down, his boat is destroyed in a massive explosion – while he swims ashore underwater.

Throughout these suspenseful episodes, director Ruskin got totally believable performances from his cast. They came across as “real people, not actors” (you should pardon the expression. Always wondered when SAG will file suit against that ad!). Beyond the dialogue scenes, the action footage is guaranteed to keep you on edge. It will be truly interesting to see what a U.S. studio like Fox will do with this series.

Opening night of this first show of the L.A. Jewish Film Festival’s second decade saw some special appearances by members of the Laemmle family, pictured below with Festival’s Hilary Helstein. Their theaters provide entertainment for all Southern California audiences. The Laemmles were suitably honored for their policy of showing motion pictures that are not only good but different, including archive films, some not available anywhere else. They take pride in their 75-year record of providing neighborhood theaters in a market where such experiences – the good old Mom ‘n Pop shop, popcorn chewing “let’s go to the movies” spirit – survives. An active Jewish family, they welcome the Festival generously.

Also addressing us enthusiastically was Beverly Hills mayor John Mirisch – another name with major importance in the motion picture industry, as the older generation’s Mirisch Brothers will be remembered for many major productions including the film versions of West Side Story and Fiddler on the Roof.

To conduct the program, Rabbi David Baron of the Temple of the Arts introduced the creator of the Festival, whom he aptly called a “one-woman dynamo,” Hilary Helstein. Still young and energetic, Hilary has indeed scored a valuable accomplishment for the Los Angeles Jewish community.

Interviewed after this year’s Festival finished, Hilary looked back happily on her first decade’s achievement. Since beginning the project in 2005, working out of the Valley Cities JCC to exhibit films in just 5 venues, she has expanded to cover greater Los Angeles. This year’s Festival included 14 venues, from Pasadena to Silver Lake to the West Valley to Santa Clarita, as well as central locations like Hollywood and Beverly Hills. A rough estimate of this year’s total audience comes to at least 5,000. This reviewer first met Hilary and her Festival when she was occupying a small office at Westside JCC, and building the event. Watching her progress since then, I have every expectation that its growth will continue. Noting some singular features of this year’s Festival, Hilary expressed special pleasure in the audience response to the documentary East LA Interchange, which pictured the oldest neighborhood in East Los Angeles, Boyle Heights. Its opening night took place at the Breed Street Shul, a spiritual home for so many Jewish Angelenos, and one that my one-time Bar Mitzvah student Steven Sass can claim credit for preserving and honoring. Treating the history of this suburb, the film told the stories of Latino, Russian, Japanese and Black residents, many of whom were in the audience along with representatives – and descendants – of what was once the largest Jewish community west of Chicago. To co-sponsor this event, Hilary brought in the Jewish Historical Society, the Latino Jewish Roundtable and Asian Jewish Initiative, and brought Congresswoman Roybal-Allard to participate in the question and answer session.

Another outstanding feature of this year’s series was the restored classic None Shall Escape, a Holocaust story starring Marsha Hunt, now only 98 years old! The Festival’s closing night welcomed Miss Hunt and presented her with the Marvin Paige Hollywood Legacy Award.

What lies ahead for Hilary Helstein and the L.A. Jewish Film Festival? For one thing, we don’t have to wait till 2017 to see the pictures she finds for us. She plans to exhibit one film per month during the year. Judging from her record, they should be well worth seeing. And we can expect the next Festival, Number 12, to outdo all the others. Save me a seat! 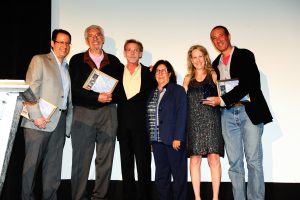