Last week’s reading identified Noah as the progenitor of the surviving human race after the Flood, and stated that Noah was selected to survive because he was “righteous in his generation.”  Compared to his contemporaries, that is.  As Rashi points out, in Noah’s generation he could be considered righteous, but if he lived in Abraham’s generation he would amount to nothing.

This week we will read some of the story of Abraham, the first Jew.  One member of his family who caused him serious problems was his nephew Lot. Both of them bred cattle and sheep, and lived on adjacent land.  A fight broke out between Lot’s shepherds and Abraham’s shepherds, so Abraham has to convince Lot that they should both move far enough to leave a safe distance between them.  Abraham settles in Canaan and Lot goes south to an area around the city of Sodom.

Although Sodom was already known for its evil ways, Lot settles there.  More about that next week.

In the population around there, after living under one local king for some 12 years, a rebellion breaks out.  Other local potentates get into the war, four kings against five. One force invades Sodom, where they take prisoners and spoils – including Lot and his family.  A refugee – whom the Midrash identifies as none other than Og, later the giant king of Bashan – comes to Abraham with the bad news: his kinsman is captured!  Abraham proceeds to arm 318 men, his own employees “born in his house”, and they join the battle.   They pursue the enemy north, “to the left of Damascus,” and rescue Lot, his family and the other captive women, and retake the spoils.

The king of Sodom comes out to greet Abraham’s victorious army. Along with him is the king of Shalem, whom our text calls Malkitzedek. The Talmud identifies him as none other than Noah’s son Shem, who would be quite an old man by now, but still able to bring out bread and wine, and to function as a priest to the Almighty.   He blesses Abraham, and Abraham gives him a donation of a tithe – 10% of the spoils.

Now comes the king of Sodom with his magnanimous offer. “Give me the people, and you take the spoils.” (The other 90%!)  All he wants, he says, is the prisoners.  Without Abraham’s fighters, they would be dead.  Will Abraham take this offer?  Here is Abraham’s answer:

“I raised my hand [in a sacred oath] to G-d Almighty, that not even a thread or a shoestring will I take from whatever is yours.  You will not say ‘I made Abram rich.’ [Your expense will be] Only what my boys ate, and the portion of those who came with me.”

From this story we can learn a vital fact about our heritage.  Our heroes may be admired for many reasons, including courage, wisdom, and strong faith.  Primarily they are praised for their character.  Our biblical patriarchs Abraham, Isaac and Jacob, our leaders Joseph, Moses, David and Solomon, retain their status – and give us their names – not because they won wars, or amassed fortunes, or got murdered by a foreign government.  They earn our devoted respect by their character.

The qualities that we revere in our ancient forebears are sometimes reflected in more recent biographies.  Or are they?  Which prominent modern Jews learned from Abraham?  Theodor Herzl? David Ben-Gurion?  Golda Meir?  Isaac M. Wise?  Stephen Wise? Solomon Schechter?  The Lubavitcher Rebbe?  Think about it.  Maybe a less famous figure qualifies, someone like Elie Wiesel, or Marvin Hier or Abraham Cooper of the Wiesenthal Center?  It could even be someone virtually unknown, like your parent or grandparent, your employer, your friend.  Whoever sets the example gives us a clue.  Whom do you admire?  As we learn from them, we learn from Abraham. 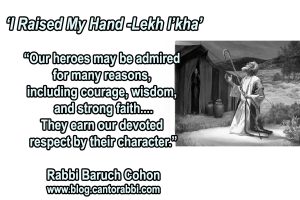