Of all feminine first names, certainly one of the most popular among our people is Judith, usually abbreviated to Judy. In its Hebrew form Yehudit it is a description of a person or a thing as being Jewish. If a Jewish man is a Yehudi, Hebrew grammar adds a letter and his sister is a Yehudit, whatever her given name might be. Most of us have at least one cousin by that name, don’t we?

Linguistically, the word Yehudit is also used to identify a Jewish language like Yiddish or Ladino. It can also signify a product or an activity as being associated with Jewish people. Want to give your kid a birthday party? Make it a Jewish celebration – a Khagigah Yehudit!

Certainly we would expect this familiar name to have Biblical roots. And in fact it does. This week’s Torah reading includes the first – and only – mention of the name Judith in the entire Hebrew Bible. And who was she? A matriarch like Sarah? A devoted leader like Miriam?

Don’t be shocked, but she was not even Jewish. Reading of Isaac’s family, we come to his older son Esau, and we learn that at age 40 Esau married two Hittite women. One of them was Judith, daughter of B’eyri, a Hittite chief. What was she like? The very next sentence describes her as a source of moras ruakh – “bitterness of spirit” – to Isaac and Rebecca.

Now wait a minute, all you Judy’s. Don’t change your name yet. We have another sacred book, later than the Tanach, a collection of books in fact, called the Apocrypha. Along with books like The Wisdom of Solomon, and Ecclesiasticus, and the two books of Maccabees that give us the Hanukkah story, here we find a book named Judith. The story it tells takes place during the Assyrian invasion led by Holofernes, one of Nebuchadnezzar’s generals. Critics place the Hebrew manuscript as written sometime around the first century BCE. The book has 16 chapters, and the name Judith does not even appear until Chapter 8. Those first seven chapters tell us about the invasion, the cruelty of the Assyrians and their takeover of all the water sources in the territories they conquered. In the city of Bethulia the people are suffering drought, while their enemies camp nearby and demand passage through the hills. Their governors are no help, stuck between a desperate population and a stubborn enemy.

Only a young widow can help them. She is Judith. Her husband died just 3 years and 4 months ago, a victim of sunstroke during the barley harvest. Still in mourning, and still beautiful, respected by her neighbors for her faithful ways – and also for the wealth her husband left her – Judith steps forward and listens to the people’s cries. The governors promised to deliver the city to the Assyrians within 5 days! All could be killed!

She sends her maids to invite the governors to her house, and she gives them a good lecture, showing them the danger of their policy, and reminding them what their forefathers did and how Divine wisdom inspired them. To which Governor Ozias replies with respect to her wisdom, and asks her to pray for them.

Judith will pray, all right, and she has other plans too. No details here; she just says in effect “Don’t stop me.” To which Ozias agrees, wishing her well. And the big shots leave.
As soon as they are gone, Judith offers passionate prayers, and then prepares for action. She dresses magnificently, makes up her face to accent her famous beauty, gathers her maids around her, and gives them some gifts to carry – wine, oil, corn, figs and fine bread. And they head for the city gate. There she demands and gets the gate opened, and proceeds toward the Assyrian camp.

What follows there is a step-by-step deception of the general, Holofernes, and his officers – all of whom find Judith fascinating. First, the officers. They welcome this beautiful woman of the Hebrews, who claims she fled the city because it and its people are doomed to be conquered and killed. She claims she can tell their leader how to take over all the hill country without losing a single soldier. They listen, they look at her face, and they believe. Without asking questions, they take her to Holofernes’ tent.

Interviewing this gorgeous lady is something Holofernes really enjoys. She states her faith in the Almighty, yet in outlining her plan to Holofernes, she swears – not by the Almighty but by Nebuchadnezzar. She declares that her nation of Israel will not be punished or defeated unless they sinned against their G-d. And she offers to guide Holofernes through her country to victory. The sessions go on for 3 days, as the Assyrian commander grows more and more fascinated with Judith. On the fourth day he orders a feast, inviting all his personal servants – but not the army officers. He orders his Number One eunuch to invite the Hebrew woman to the feast, to eat and drink with him. She accepts, but insists that she may not eat or drink anything but what she and her maid brought with them. She will not break any kosher laws.

Holofernes has no such limits, either on solid food or on wine. He welcomes Judith into his private tent and proceeds to drink himself unconscious. Nobody else will enter the tent, because the eunuchs are following orders to shut the door and stay outside with Judith’s maid. Alone with Holofernes now, Judith approaches his bed, where he is out cold. She looks up and sees something hanging from the upper bed frame. A scimitar! Hands trembling, she takes the scimitar down. Silently she prays: “G-d of Israel, make me strong today!” And she strikes the snoring man’s neck – not once but twice, with all her might. The head rolls free. She pulls the bedclothes around the body, wraps the head and takes it outside to her maid, who hides it in the food bag. They immediately proceed up the mountain to Bethulia’s city gates. She proclaims that G-d’s mercy is still with His people, and calls for the governors. They hear her voice and run to admit her.

“Look!” she says, “Here is the head of Holofernes, captain of the army of Assyria. See the canopy where he lay drunk. G-d struck him by the hand of a woman.” And she continues to express her thanks to the Almighty that the general fell for her fabulous face, but never defiled her body.

Ozias the governor praises Judith and orders an attack on the enemy camp. They take Judith with them, heroine of the nation. Their counterattack drives the enemy all the way to Damascus and beyond. They reward Judith with all the spoils they take from Holofernes’ tent, and Judith leads the women of Israel in victory songs and dances.

She also composes a song of celebration that is the last chapter of her book.
So the woman who caused Isaac and Rebecca such spiritual pain had the same name as the woman who brought victory and holy gratitude to her entire country. Which Judith would you rather be?

Probably most of today’s Judys would say Neither one. And very likely they are right. When we name our babies after our parents or grandparents, we hope that the name will bring some of the goodness of our loved ones of blessed memory to these new members of the family. And when we give a new child a name of an ancient foreparent – a Sarah or an Abraham, a David or – yes, a Judith – we do so with a prayer for the honor that comes with that name. Earning that honor is up to our child.

So we wish all our Judy’s some of the devotion and courage and success of your namesake. And all the acclaim of your people. 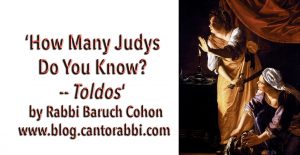