Of all the dreamers in human history, Joseph stands out.  We meet him in this week’s Sedrah Vayeyshev, at age 17, telling his father and his older brothers about his dreams.   One is a dream of physical glory, in which he sees his sheaf of grain stand up in the field while all their sheaves surround his and bow.   The second dream is highly symbolic, with the sun and moon and 11 stars bowing down to him.  Already unpopular with his brothers, since he was Jacob’s favorite son, these dreams earn him their mortal hatred.  They refer to him as “baal hakhalomos – the dream-master.”  They consider murdering him, and decide instead to sell him into servitude.  His dreams of glory begin to turn into nightmares.

What happens in between makes the story of Joseph not only a great classic biography, which inspired retelling it by writers from Thomas Mann to Andrew Lloyd Weber.  It also gives us a unique lesson in how to make our dreams come true.  Joseph’s character develops under all different kinds of pressure.

First come the Ishmaelites on the caravan, who buy him from his brothers for 20 silver coins.  All of a sudden this spoiled kid becomes a slave.  He is human merchandise that they will sell in Egypt for whatever they can get, and until they arrive there he will earn his meager meal by helping tend the camels.   A boy who seldom even got a direct order from his indulgent father, now gets plenty of orders – and kicks and slaps — from heathen camel-drivers.  He learns to take it.  He has no choice.

Then comes Potiphar, the Egyptian aristocrat, captain of the guard.  He puts Joseph to work in his house.  By now Joseph knows enough about taking orders to anticipate what needs to be done, and with native intelligence and youthful energy he does it efficiently.  So Potiphar makes him major domo.  Bright and good-looking, he is soon running the whole estate.

Then comes Potiphar’s wife.  She takes a look at this young man and decides she wants him.   Her proposition is anything but subtle:  “Lie with me!”  Young as he is, Joseph senses the risks.  And his home training warns him that this is wrong in the sight of G-d.  So, unlike some of our politicians, he turns her down.   What might be going through the mind of this 18-year-old slave, we don’t know.  Is he a virgin?  Is the lady attractive?  Could he really desire her?  The Torah narrative ignores those questions.  But the cantillation for the word va-y’ma-eyn (he refused) is a shalshelet, literally a “chain” – the rarest and most ornate of musical figures in Torah chant, reserved for important words.  That refusal is very important.

Incidentally, Rashi quotes the Talmudic opinion that Potiphar himself had a homosexual desire for Joseph.  Which might explain his wife’s eagerness for something she was not getting from her husband.  The Torah identifies Potiphar as a saris, usually translated “officer” or “courtier” but literally meaning “eunuch,” as were many of ancient potentates’ courtiers, surgically emasculated to safeguard the king’s harem.

Indeed Mrs. P keeps tempting Joseph day after day without success, until one day when the other servants are not in the house she grabs his cloak to pull him into bed.  He leaves the cloak in her hands and goes out.  Frustrated and angry, she uses the cloak as evidence to frame him for attempted rape.  So Joseph goes to prison.

Next come his jailer and his fellow prisoners.  He impresses the jailer enough to become his right-hand man.  And his fellow inmates come to him to interpret their dreams.  In the following Torah portion we will read how Joseph’s interpretations lead Pharoah to release him and make him viceroy.  Add some Divine inspiration, and Joseph is in position to receive his brothers and his father, and to save them from starvation.

How did he get there?  It was no easy trip.  The Ishmaelite caravan taught him to work.  Servitude on Potiphar’s estate developed his ambition and enabled him to find ways to achieve it.  Never forgetting his father’s teaching, he is able to weather his sexual trials and to make the best of an unjust punishment.  By the time he meets Pharaoh at age 30, Joseph has all the qualifications to live out his boyhood dream.  Running the country for the next seven years and controlling its economy to survive poverty, he earns the right to have “the sun and moon and 11 stars bow to him.” No, it wasn’t easy.

Fulfilling our dreams never is.  Typically it involves hard work, strength to endure disappointments and rise above them, backbone to live by our principles, and enough imagination to preserve the vision we aim for.   Like Joseph, we might have to spend 20 years getting there.  Maybe less, like Mark Zuckerberg.  Or maybe more, like most of us.  But it is our challenge, a sacred journey that calls us to bring our vision to life. 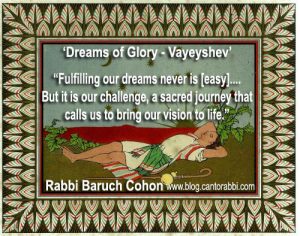