What did Charles Darwin discover? The doctrine of evolution; everyone knows that. And who am I to dispute with him? Many educated modern people will tell me that the universe we live in was not created in a week. It evolved over eons of time. And they are probably right.

Do I therefore discard the Biblical account of the origins of our reality? Do I reject it as fiction?

To no one’s surprise, my answer is No. I accept the Divine origin of the universe and of life itself.

Does that mean that I reject Darwin’s theory of evolution as fiction?

Here’s the surprise. My answer to that is also No. I respect scientific evidence of evolution. Dinosaurs evolved into birds. Cavemen evolved into – well, something more familiar if not superior… And it all took many many centuries.

So what about the story we read in this week’s Torah portion, the opening lines of the Bible: “In the beginning G-d created heaven and earth?” What about the account of darkness, then light, then “evening and morning, one day?” Did the planets materialize as they are now, in nearly the time it takes to tell it? One day? When the Hebrew calendar counts this as the year 5779 since Creation, can we moderns accept that number?

All right, let’s explore the dispute. To begin with, how long is “one day?” We think of it as 24 hours, and we observe it from sunrise to sunrise. When there was no sun, how long was a day? How many eons in human time did the Creator spend producing stars and planets? Taking note of the Biblical order of things, we read first about our own planet: “Earth was chaos, and darkness over depth. The spirit of G-d hovered on the face of the water.” Never mind the printed translations. They can be misleading. The message is simple: Creation precedes Evolution.

But evolution happens. It happens in Genesis, in the same order as in Darwin. Believe it or not. Life starts with vegetation, grass, herbs, trees. Next comes life in the water, from tiny fish to seagoing giants, presumably leading to amphibians. Followed by land animals, first birds and insects and reptiles (dinosaurs maybe?) then wild beasts. And finally on the 6th “day” humans arrive, endowed, says our Torah, with the Divine image. It’s all right there in Chapter 1. Humans, male and female, are given power to dominate the other creatures.

Granted, Genesis does not go into what ancient human beings looked like or how they acted. No Neanderthals here. At this point, evolutionists tend to concentrate on the physical while creationists stress the spiritual elements in human history.

After those six super-days of Creation comes the Sabbath. Opening Chapter 2 is the Divine blessing on the 7th day, because “G-d rested” from the work of Creation. A new question: did the Creator put His image in us or are we putting our image on Him? Does G-d get tired and need a rest? No, says the Talmud. But the “Torah speaks in the language of people.” An achievement like Universal Creation calls for a Divine day of rest, just as surely as a week of tending crops, building homes, caring for children – or even writing blogs — calls for a human Sabbath. If you are observing the Jewish Sabbath this week, you will hear the Creation story. Again. Yes, we read it last year. And no, it didn’t change. But we did. These are not the eyes that read it before, or the ears that heard it. Maybe we can take a new look at this account of the birth of our universe and the beginning of its evolution. Maybe we can realize that they go together. 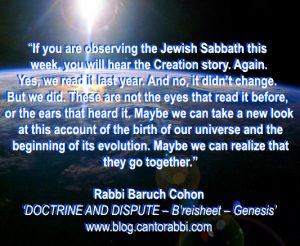