This month we look forward to our supremely happy holiday, Purim.  We celebrate the risk that Queen Esther took, to reveal her identity to her impulsive royal husband, Akhashverosh – sometimes identified as Xerxes.   He could turn her out of the palace for deceiving him, and send her to die with the rest of the Jews.  After all, he was an absolute Middle Eastern monarch.  Didn’t he depose her predecessor Vashti just because she refused to parade naked before his guests?  Wasn’t the current super-antisemite Haman his favored officer?  And wasn’t it her uncle Mordechai’s refusal to bow that stimulated Haman to plot genocide of her people?

But Esther couldn’t deny her uncle’s message:  “Who knows if for a time like this you attained royalty?” When her parents died it was  Mordechai who rescued her and raised her.  Mordechai’s very name represented everything she valued: Mem for mitzvah (sacred duty), Resh for rakhamim (mercy), Daled for din (justice), Khaf for kavod (honor) and Yud for y’hudi (Jewish).  And their enemy’s name?  It was shorter but even more representative:  HaMaN represented H for hate, M for mass murder and N for nightmare, something she already experienced.

So she appealed to the absolute Middle Eastern king, and he ordered Haman executed.  And the date Haman decreed to wipe out the Jews was turned into Purim when the king gave those Jews the royal OK to defend themselves, and they won every battle.  So the first Purim day was the original D-Day – destruction day for Israel’s enemies.

Haman’s spiritual descendants don’t go away, do they?  Today’s Persian officer even uses Haman’s name, just pronounces it in Arabic as kHoMeiNi.  The same three consonants still represent Hate, Mass Murder and Nightmare.   And there is an absolute Middle Eastern monarch who opposes him, namely the young Crown Prince of Saudi Arabia, Mohammed bin Salman.  His task this Purim would be even easier than that of Akhashverosh.  With an order from the Crown Prince, a quick attack across Arabian airspace could finally defeat today’s Haman a good deal more spectacularly than the original Haman.

What a Purim that would be!   Of course it’s unlikely to happen, unless a modern Esther shows up.  A glamour girl like Gal Gadot could play the part, if Prince Mohammed just held a beauty contest to pick a new queen.

What’s that you said? 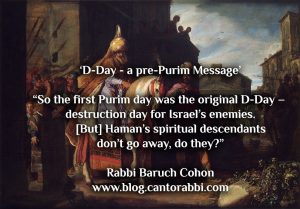