Among the 70-odd Mitzvos detailed in this week’s Torah reading, we find one that echoes strangely against today’s discussions of intergroup relations.

Deep in this section’s third Aliyah, Chapter 23 has Moses cautioning the people: “No Ammonite or Moabite shall enter the assembly of G-d, even to the tenth generation.” Why? “Because they did not meet you with bread and water when you came out of Egypt.” No refugee status. No public handouts. In fact, they “hired Bilaam ben Beor…to bring a curse upon you.”

True, Ammon and Moab did not build any walls to keep Israel out, but they did not welcome us either. We didn’t speak their language. Maybe our eyes were a different shape? Or our skin a different shade?

By the standards of that day, Ammon and Moab had well established monarchies, and represented prosperous nations. They did not need an influx of ex-slaves, speaking a foreign language (Hebrew, that is, not Spanish).

Presumably they didn’t want immigrant kids in their schools earning all the highest grades, even if they didn’t calculate in Chinese.

Could we in our time possibly be duplicating the ancient offense of Ammon and Moab?

Or were they just typical of their time, treating any other nation as an enemy?

But wait. In our Torah reading, a contrasting rule follows immediately: “Do not despise an Edomite; he is your brother.” Edom opposed Israel, but the ancestor of their nation was Esau, Jacob’s brother. Likewise, “Do not despise an Egyptian; you were a stranger in his land.” As the rabbis explain, enslaving the Israelites was the work of the tyrannous Pharaohs, not of the people. In fact many Egyptian commoners followed their Israelite neighbors in the Exodus.

So for our ancestors, relations between national populations grew complicated. Moses attempted to put some ideals to work in forming those relations. It was difficult for him, and that difficulty extended into the following centuries.

In the case of Ammon and Moab, for example, the ban applied to men, but a woman could become a giyores – a convert – and be totally accepted. The prime example of that process was the young lady who gave her name to a particularly beloved book of the Bible, namely Ruth. Moabite though she was, she married Boaz and became the ancestress of no less than King David.

Maybe we in the United States are not consistent in our attitude toward the “stranger,” the refugee, the unfortunates who seek a better life. We don’t always meet them with “bread and water.”

Still, our country has a better record on immigration than many other nations. Certainly a large majority of us became American Jews by moving here from oppressive foreign shores. Many of us, or our parents or grandparents, had to travel halfway around the world, with no money, no connections, no language to greet their new countrymen. I will never cease admiring the courage of our Immigrant Generation. Much of that kind of courage can be seen in the faces of the young people who throng U.S. borders now.

No, we are not encouraging our government to admit criminals, and definitely not terrorists. But we have some power to check an immigrant’s record. And we can still move away from the offensive stance of Ammon and Moab. Even some bread and water can help. 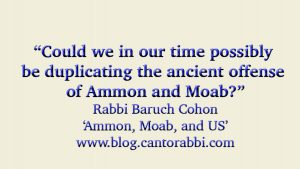