This week’s Torah reading continues Moses’ farewell discourses, and covers several topics, connected by the concept of blessing vs. curse. Follow Divine law and earn blessing, or break that law and be cursed. Most years, we tend to select the moral absolutes outlined here and glean their message. This year I cannot dodge a challenge with which Moses confronts our ancestors at the very beginning of Chapter 12.

“These are the statutes and ordinances that you must be sure to do, in the land that the G-d of your fathers gave you to possess it, all the days that you will live on earth. You must totally destroy all the places where the people you are dispossessing served their gods – on high mountains, on hills, and under every leafy tree. Break their altars, smash their pillars, burn their idols, chop down their graven images and wipe out their name from that place.”

From the commentators and from historians we learn that many of those altars provided locations for sacred prostitution. These were not just for prayer and sacrifice. They were gathering places for eating and drinking and sanctified sex. So they had to be destroyed.

Israel is to be a one-faith state. And it is to have just one sacred place, which Moses does not describe here, but after some temporary locations for the Holy Ark in places like Gilgal and Shiloh, and David dancing before the Ark in transit, we know that King Solomon would build the Temple in Jerusalem.

No Dome of the Rock. No El Aqsa. No Church of the Holy Sepulchre. The Bet haMikdash stood alone.

In 586 BCE Nebuchadnezzar would not rest until he destroyed – what? The king’s palace? The royal treasury? Of course not. He had to destroy the First Temple and that’s what conquered the nation.

In 70 CE the Romans followed his example, and even commemorated their destructive victory with images on the Arch of Triumph showing Roman soldiers carrying the sacred Menorah out of the Second Temple.

So now our Sedrah fairly demands the answer to the events of the 20th century:

Did modern Israel violate Torah law by turning the Temple Mount over to a Jordanian theocracy to administer? Other nations don’t do that. In effect, some of them could be said to observe the violent commandment in this week’s Torah reading. Jihadis smash statues of Buddha in Pakistan, and their archeological imams in Jerusalem find and destroy relics of Solomon’s Temple in a pan-Islamist campaign to banish Jews from the land they call Palestine. In Europe, synagogues were polluted and destroyed by pogromniks for centuries. Nazis used them for stables. Arab terrorists target them in France and the Netherlands and Scandinavia now.

Certainly our Torah portion, Re’eh – “See here!” – does not anticipate a time when a Jewish country, in its classic Biblical location, would voluntarily share its most sacred place with its sworn enemies. Various rabbinic commentaries advise us of possible future changes on the Temple Mount. One teaches that the Moshiach – the Messiah (the Jewish one, that is) – will build the Third Temple. When that happens, Israel would once more be a one-faith state.

Are there any others?

Well, Saudi Arabia comes to mind. Its holy cities, Mecca and Medina are closed to non-Muslims, and the faithful are expected to make a pilgrimage to those sanctified places at least once in their lifetime. For sure, there is no synagogue in Mecca. No church either.

21st century publicity stresses the position of Jerusalem’s holy mountain as being sacred to three religions. This despite the fact that many people who were born into those religions do not observe them, and so do not visit that mountain anyway.

Fifty years ago Israel fought a Six-Day War which strengthened its position in many areas, including East Jerusalem, fighting their way through the alleys of the old city, and encountering no significant opposition. One famous memory from that campaign recounts a message General Motta Gur radioed to headquarters. Just three words: Har habayit b’yadeynu – “the Temple Mount is in our hands!” To his shock, the government would not let him take it. They thought they could avoid large-scale Muslim attacks if they denied his conquest.

Many times since then, that decision was questioned.

Would it make Israel stronger, or bring the Moshiach any closer, if the IDF demolished a couple of mosques? Or would the Six Day War bring on a conflict of decades? We won’t know. The mosques stand, and the conflict continues.

But if we can learn one lesson from Re’eh, let it be this: We can approach G-d wherever we are. Even at the Kotel, the Western Wall – depending on who you are, and what the latest political decision may be as to where you should pray if you are female. We can pray for the advent of the Moshiach. We can certainly ignore the pretentions of our enemies. And whatever our religious approach may be, we can follow it in truth. No longer can we expect Israel to be a one-faith state. But we can make sure it will never be a no-faith state.

Let us keep whatever Mitzvos we are able to, in Los Angeles or Tel Aviv or on the Temple Mount, and let us do it sincerely. Sincerity can bring us blessing. The opposite already brought us enough curses. 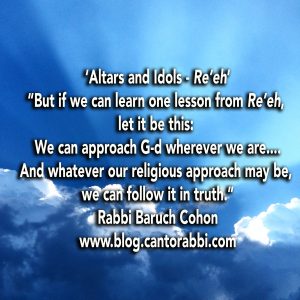 This entry was posted in Jewish Blogs. Bookmark the permalink.