It was my freshman English class at the University of Cincinnati and the young professor was announcing that next week we would begin the study of the short story. He gave us an assignment to prepare us for this. “If you have a Bible at home,” he said, “go home and read the Book of Esther. It’s the most perfect short story ever written.” He was not Jewish, and I didn’t have to do the assignment. Why should I? I’d been reading the Book of Esther every Purim all my life. I knew it and loved it.

Of all the holidays of the Jewish year, Purim stands out as the most light-hearted, high-spirited, almost frivolous of celebrations. Wear funny costumes with crazy hats. Have a party. Yes, it’s a mitzvah to hear the Megillah – the Book of Esther – read in the synagogue, but when you hear the name of the villain Haman you twirl those noisemakers to drown it out. Above all, have a drink.

That’s right, have a drink. And not just a formal l’hyyim. The Talmud even recommends that a man should imbibe on Purim until he cannot distinguish between the words “bless Mordecai” and “curse Haman!” The Hebrew for not distinguishing is ad d’lo yada – literally “until he does not know” – and that became the name of an annual Israeli event, the Adloyada Purim parade.

Like other such times of letting it all hang out, that experience can backfire. Of course, every Hebrew letter has a numerical value. Alef = 1, bet=2, gimel=3… yod=10…kuf=100, etc. Add up the value of the letters that spell out “bless Mordecai – baruch Mordechai,” then the value of the letters in “curse Haman – arur Haman” and you will come up with two identical totals: 502. That’s right, the number for a drunk driving violation!

So much for driving on Purim. Have that party at home!

On another track, Purim celebrates a miracle, the one time when a threatened destruction of Jewry did not happen. One time when the Jews were alerted to defend themselves, and they succeeded. All because one young Jewish woman named Esther risked her life to plead the cause of her people to an unpredictable potentate. As the Megillah tells us, Mordecai urges her to take the chance, because as he says “Don’t think you will escape this danger in the king’s house. If you keep silent at a time like this, relief and rescue can come to the Jews from somewhere else, but you and your family will perish, and who knows if just for such a time you arrived at royalty!”

Esther bites her lip and decides to face the king, but she charges Mordecai: “Go and gather all the Jews in Shushan, and fast for me and pray for me for three days. I and my maids will fast too. Then I will go to the king, and if I perish, I perish.” So Mordecai went and carried out what Esther asked him to do.

Now that’s a miracle worth celebrating any time. Happy Purim! 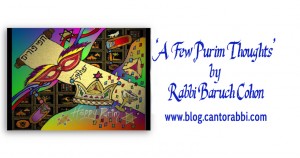 3 Responses to A FEW PURIM THOUGHTS — by Rabbi Baruch Cohon